7/10
Two married couples become increasingly agitated with each other as they find out things about each other's past, while one of them is receiving disturbing packages from an unknown source. (91 mins.)
Director: Onur Tukel
Stars: Max Casella, Trieste Kelly Dunn, Jennifer Prediger, Onur Tukel

7,5/10
During the Cold War, an American lawyer is recruited to defend an arrested Soviet spy in court, and then help the CIA facilitate an exchange of the spy for the Soviet captured American U2 spy plane pilot, Francis Gary Powers. (141 mins.)
Director: Steven Spielberg
Stars: Tom Hanks, Mark Rylance, Alan Alda, Amy Ryan

6,5/10
A physician in Michoacán, Mexico leads a citizen uprising against the drug cartel that has wreaked havoc on the region for years... (100 mins.)
Director: Matthew Heineman

5,5/10
When her father unexpectedly passes away, young Ella finds herself at the mercy of her cruel stepmother and her scheming step-sisters. Never one to give up hope, Ella's fortunes begin to change after meeting a dashing stranger. (105 mins.)
Director: Kenneth Branagh
Stars: Lily James, Cate Blanchett, Richard Madden, Helena Bonham Carter

6/10
A father and son who team up to save Christmas once they discover Santa Claus sleeping in their garage after crashing his sleigh and finding himself on the run from the police. (102 mins.)
Director: Christopher Smith
Stars: Jim Broadbent, Rafe Spall, Kit Connor, Ewen Bremner

6/10
A Welsh teenager will become the cool kid of the town if a deal is made with his new American neighbour. (84 mins.)
Director: Craig Roberts
Stars: Emile Hirsch, Craig Roberts, Richard Harrington, Mark Lewis Jones

6,5/10
Murphy is an American living in Paris who enters a highly sexually and emotionally charged relationship with the unstable Electra. Unaware of the effect it will have on their relationship, they invite their pretty neighbor into their bed. (135 mins.)
Director: Gaspar Noé
Stars: Aomi Muyock, Karl Glusman, Klara Kristin, Juan Saavedra

5,5/10
Paul is preparing to leave Tajikistan, while thinking back on his adolescent years. His childhood, his mother's madness, the parties, the trip to the USSR where he lost his virginity, the friend who betrayed him and the love of his life. (123 mins.)
Director: Arnaud Desplechin
Stars: Quentin Dolmaire, Lou Roy-Lecollinet, Mathieu Amalric, Dinara Drukarova

5,5/10
Two women who grew up together discover they have drifted apart when they retreat to a lake house together. (90 mins.)
Director: Alex Ross Perry
Stars: Elisabeth Moss, Katherine Waterston, Patrick Fugit, Kentucker Audley

6,5/10
Hannah and Tahir fall in love while homeless on the streets of New York. Shelter explores how they got there, and as we learn about their pasts we realize they need each other to build a future. (105 mins.)
Director: Paul Bettany
Stars: Adolfo Mendez-Nouel, Anthony Mackie, Kevin Hoffman, Teddy Cañez

7,5/10
An idealistic FBI agent is enlisted by a government task force to aid in the escalating war against drugs at the border area between the U.S. and Mexico. (121 mins.)
Director: Denis Villeneuve
Stars: Emily Blunt, Josh Brolin, Benicio Del Toro, Jon Bernthal

6/10
Jafar Panahi is banned from making movies by the Iranian government, he poses as a taxi driver and makes a movie about social challenges in Iran. (82 mins.)
Director: Jafar Panahi
Stars: Jafar Panahi

5/10
Set in the world of New York publishing, a young book editor is forced to confront a troubling chapter from her past when a bestselling author re-enters her life. (86 mins.)
Director: Marya Cohn
Stars: Emily VanCamp, Michael Nyqvist, Ana Mulvoy-Ten, Talia Balsam

6/10
70-year-old widower Ben Whittaker has discovered that retirement isn't all it's cracked up to be. Seizing an opportunity to get back in the game, he becomes a senior intern at an online fashion site, founded and run by Jules Ostin. (121 mins.)
Director: Nancy Meyers
Stars: Robert De Niro, Anne Hathaway, Rene Russo, Anders Holm

6,5/10
Left without men in the dying days of the American Civil War, three Southern women - two sisters and one African-American slave - must fight to defend their home and themselves from two rogue soldiers who have broken off from the fast-approaching Union Army. (95 mins.)
Director: Daniel Barber
Stars: Brit Marling, Hailee Steinfeld, Sam Worthington, Muna Otaru

7/10
During a manned mission to Mars, Astronaut Mark Watney is presumed dead after a fierce storm and left behind by his crew. But Watney has survived and finds himself stranded and alone on the hostile planet. With only meager supplies, he must draw upon his ingenuity, wit and spirit to subsist and find a way to signal to Earth that he is alive. (144 mins.)
Director: Ridley Scott
Stars: Matt Damon, Jessica Chastain, Kristen Wiig, Kate Mara

8/10
A frontiersman named Hugh Glass on an fur trade expedition in the 1820s is on a quest for survival after being brutally mauled by a bear. (156 mins.)
Director: Alejandro G. Iñárritu
Stars: Leonardo DiCaprio, Tom Hardy, Will Poulter, Domhnall Gleeson

6,5/10
Even though awaited, no-one is really ready when the mountain pass of Åkneset above the scenic narrow Norwegian fjord Geiranger falls out and creates a 85 meter high violent tsunami. A geologist is one of those caught in the middle of it. (104 mins.)
Director: Roar Uthaug
Stars: Kristoffer Joner, Thomas Bo Larsen, Ane Dahl Torp, Fridtjov Såheim

38.
Takva su pravila (2014)
6/10
After their son has been beaten up in the street, parents find their world of false security collapsing and have to re-examine their lives and question everything into what they believed.
Director: Ognjen Svilicic
Stars: Goran Bogdan, Ljubomir Bandovic, Emir Hadzihafizbegovic, Stjepan Peric 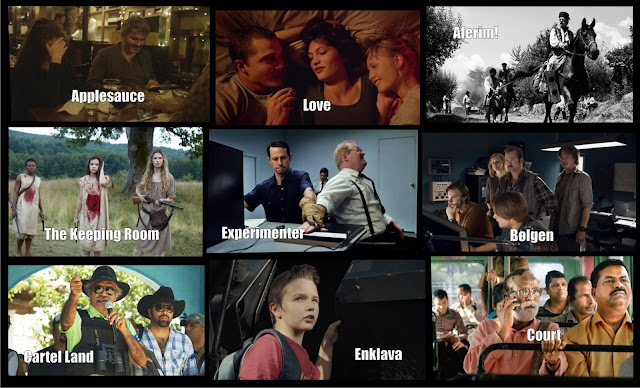